Psoriasis is a chronic, skin condition that affects about 2-3% of the general population in the United States. Individuals with psoriasis have thick, red, and scaling patches on their skin. Psoriasis is not contagious. And, there is no cure for psoriasis but effective treatment options exist to manage symptoms. 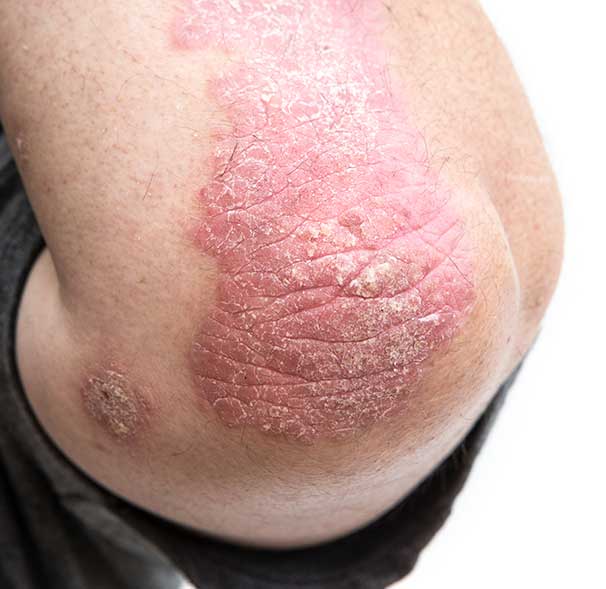 Signs and Symptoms of Psoriasis

The severity of psoriasis varies from person to person. Some individuals may have mild severity, with only a few scattered areas of involvement. In contrast, some individuals have severe cases, with near complete total body involvement. Common signs and symptoms include:

There are several types of psoriasis including:

The exact cause of psoriasis is not fully understood. It is thought to be related to problems of the immune system. More specifically, the immune system will send errors in signaling that tells the skin to grow too quickly. Consequently, skin cells form in days instead of weeks.  The body does not shed these excess skin cells.  The skin cells accumulate on the surface of the skin, thereby creating patches of psoriasis.

Factors that may trigger psoriasis include:

The aim of therapy is to reduce number of skin lesions and improve skin symptoms including skin itching and irritation. Several recommendations include:

Take good care of yourself. Eating healthy diet, exercising regularly, not smoking, and avoiding alcohol can help prevent flare-ups or worsening of psoriasis. If these self-care measures are not adequate in controlling your symptoms, you should see a dermatologist for further evaluation and treatment.

There are many prescription-strength treatments that are highly effective in controlling psoriasis.

For more extensive psoriasis, therapies may include:

If you are interested in learning more about treatment options for your psoriasis, please call Heller Dermatology & Aesthetic Surgery to schedule your appointment!

© 2020 Heller Dermatology and Aesthetic Surgery. is your premier Long Beach skin doctor, with services from Botox to liposuction to laser skin treatment. - All Rights Reserved. | Sitemap